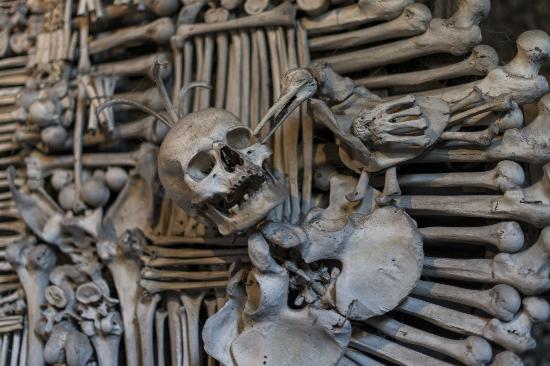 Samhain. The night when the veil between the worlds is thinnest. The night on which we set an extra plate on the table for those who are no longer with us, and the sons of Oberon walk the streets.

For the Celts it was also the beginning of the dark half of the year, the new year. As I understand it, they believed that everything starts in the dark. I find that a beautiful idea. A life begins in the dark of the womb, a story in the shadow of an as yet unexplored idea. Courage blooms in the darkness of fear, and the new day dawns from the black of night.

This won’t come as a surprise to anyone who knows me, but I think there is a form of magic in the spooky ghost tales that make us shiver. Small fears obscure the large ones. There is very little difference between the civilized, rational people of today and the primitive folk of myths, bear skins and campfires. Deep within each of us, there is a fearful creature who is certain that the clatter heard from outside wasn’t just a rake toppled by the wind, but the troubled and murderous spirit of Uncle Theophilus. Our fascinating dark half.

In the spirit of shared Samhain terror, I present to you my Top Three ‘you had to be there, it was SO scary’-moments.

About three hours’ drive from Perth in Western Australia there is a town so small and so far away from everything that it almost shouldn’t have a name, but it does, and it’s called Hyden. The great tourist draw card at Hyden, Wave Rock, attracts about sixteen visitors annually. If you go a little further into the scorchingly hot bush, you can find Mulka’s Cave, where the earth seems to swallow you whole. Mulka’s Cave has beautiful, prehistoric wall paintings and an eerie legend. Mulka was a bear of a man, but as cross-eyed as an otter. That meant that he was not allowed to hunt, because he couldn’t throw a spear accurately. Frustrated, Mulka decided to live in the cave and catch and eat only human children. The paintings on the rock are said to be the bloody handprints left behind by Mulka.

The cave was scary enough – even the flies seemed reluctant to enter – but the scariest moment for Camilla and me came after we’d bravely spent a suitable amount of time in the presence of Mulka’s spirit, and were returning to the car. The path to the road was lined with low bushes, leafless in the heat. I don’t know which one of us saw the bag first, but I can still remember that we looked at each other and, without saying anything, came to the same conclusion. There, about twenty metres into the bush, lay a corpse. It was hidden in a garbage bag, but that did not fool us. Next to it was a single, forlorn shoe. The flies swarmed around the plastic.

We stood for five minutes, transfixed, looking at the corpse. We finally gathered the courage to go and see how far gone the corpse was; of course it turned out to be just a bag of rubbish. But I’ll never forget that moment I was absolutely sure I was looking at a dismembered body – I had goose bumps right up to the back of my ears.

#2 The last train to Transylvania

You’re with friends in the Czech Republic for a long weekend in Prague, it’s summer and the weather is great. You drank just a little too much last night and you decide to leave Prague today to see something outside of the city. At the railway station, one of you spots a place name and you immediately know where you’re going. Because no matter how adult you are, a part of you will always stay 12 years old, and that makes Kutna Hora irresistibly funny to a Dutch speaker [translator’s note: In English, this would be the equivalent of – how to put this delicately – a place being called Lady-bits Sex-worker]. Furthermore, the town has a monumental church. No, really! We didn’t know this either at first, until we got off the train and all of a sudden found ourselves looking at several hundred skulls. The Sedlec Ossuary is built from the bones of bubonic plague victims. The Black Death! Surprise!

Impressed by the morbid artwork, we decided to go and have a drink at the town market place. One drink quickly became four … and then eight … Then the sun set, and we had to hurry to catch the last train back to Prague; luckily we were just in time.

A short while later the conductor came along. The exchange went something like this:

We: Errmmm yeah… Nah… Haha, I seem to have forgotten how to speak Czech. I like your uniform, misterrrrrrrr.

We: Yup, all right… no problem. Here they are. Whoops wait, I’ll pick them up. There you go.

We: No, we are going back there, yes! Hahaha.

He: This train; Prague no.

He: No Prague. You get off.

At this time the train slowed down. The guard glared at us. We asked him how in God’s name we were going to get home. He shook his head.

He (shouting): YOU OUT NOW!

The next moment we were standing on a platform in the pitch dark. I walked to the station, which seemed too small to be real, and it was true. I opened the door and looked out over an abandoned field. It was just a facade. On a rotting wooden sign we read that the very last train to Prague was still to come. Meanwhile we had to wait.

There was a lamp that cast everything in an old, yellow light and threw long shadows which seemed to follow you. Every few minutes the boom gate at the crossing closed in response to a passing ghost train (probably full of plague dead), and then a bell began to ring with an irregular rhythm, like the death knell in a gothic horror story.

We stood waiting in silence until either the last lamp should go out and the local vampire club devour us, or the train should arrive. Luckily the Czech Republic doesn’t use the Fyra.

#1 The forest at Fougères

I can already see you thinking, Uh Arnout, what ‘s so scary about a forest in Brittany? And why didn’t you go to the castle while you were there? Well, here’s the thing.

Camilla and I were on our first holiday together. We were driving through the French countryside in an old, loyal Volvo 240GL and decided to stop for a picnic dinner, just the two of us, in the forest of Fougères. More specifically, at the site of the Cordon des Druides, a row of standing stones among the trees.

We arrived in Fougères a little later than expected, at dusk. We took the exit off the highway, a smaller road through the forest, and finally turned onto a narrow path where the car barely fit. Nothing to worry about. Although … From the moment we’d entered the forest until we finally stopped by the stones in the twilight, we’d not seen another living soul. There was nothing alongside the path. No sign with cheerful explanatory drawings and notes about the site, no parking area, no French family with whining children – only trees and woods and silence. Usually a forest is full of all kinds of sounds: birds, rustling leaves, animals creeping through the undergrowth, the sound of cars passing in the distance. Here it was quiet. And there are few things as scary as complete silence. We got out of the car, and immediately decided we weren’t going to stay and eat there.

However, because we weren’t wimps (haha!), we walked the length of the row of stones and back again. We found ourselves unwilling or unable to speak, and I was only too happy to get back to the car. It was as if we were being physically pushed. Go away! You are not welcome here!

At the moment we got back into the car, two huge ravens  appeared out of the bushes on either side of us. They screeched loudly at us and flew away. Perhaps I screamed back in utter panic, I don’t remember. I do remember that we drove like maniacs to the largest, most well-lit fuel station we could find, where we spent the rest of the night under the bright lights of the car park, with the comforting sounds of muzak as our lullaby.