Rather fail with honour than succeed by fraud 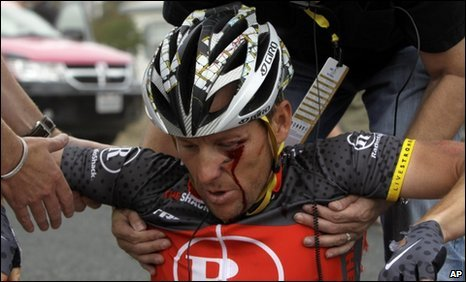 Sophocles wrote that. About 2.500 years ago. In his play ‘Philoctetes’, young Neoptolemos, son of brave Achilles, utters it when faced with a moral dilemma by cunning Odysseus. What follows is a tale of doing what is right versus that which gets a result. It seems that two and a half millennia later we still struggle with that choice. In daily life as well as in matters of state. And in sports.

I grew up a big fan of cycling. I won’t say that cyclists were my heroes, because I’m not really into hero worship, but I admired them for their dedication and achievements. Favourites of mine include: Claudio Chiappucci, Richard Virenque, Frank Vandenbroucke, Johan Musseeuw and Jan Ullrich. (follow the links for youtube footage). All of them have now been exposed as dopers. For one of them, the drugs played a large part in his premature death at 34. In retrospect, it is difficult to find a popular or successful cyclist in the last 25 years that did not enjoy chemical assistance. Greg LeMond, perhaps, was one of that rarest of species. The others are still immensely dedicated, but my admiration has diminished. The game is rigged. In modern cycling if you want to win, you dope.

That realisation didn’t come to me until quite late. Call me naive, but when the Festina scandal broke in 1998 and I read Willy Voet’s book about it afterwards, it knocked me for six. I was 15 by then, and two years into my not-so-very-successful racing days. Still shocked, I was even a firm believer of the miracle of ’99, when that Texan kid returned from the dead to win the holy grail. Innocence once lost, cannot be regained however. And as the years past, the cynic in me found more evidence to support his case than the idealist. By 2001, 2002 I disliked Armstrong. Not only for his arrogance and bullish nature, but also because I could no longer believe in what he, or his team, did out there on the road. Here’s the climb up to Alpe d’Huez of 2003. The pace up the steep slope of the mountain is INSANE. I know, I have climbed it myself.

And now there is the Sports Illustrated article, called ‘The Case against Lance Armstrong’. It makes for compelling reading. The cynic in me says it’s only the tip of the ice berg, and I’m inclined to believe him. I haven’t heard from the idealist in a long time. Cycling is a beautiful sport, but it’s rotten to the core. I hope they get Armstrong, and I hope they get the whole organisation behind him as well, from his team all the way up to the corrupt UCI*. Yes, it might ruin the sport, but I believe that the sport needs to be torn down, and destroyed completely before it can be rebuild.

Do I believe cycling will ever be dope-free? No, no sport is. But the culture can change. And to me at least, seeing men struggle up a hill or fight against the wind as they race over cobble stones is just as exciting at 35km/h as at 42km/h. It’s the men that thrill the audience not the results.

In the end Neoptolemos manages to stand up to sneaky Odysseus and the wrath of the Greek army. Sophocles then brings on one of the Gods to help him succeed in his original goal as well. Unfortunately there are no such interventionists gods around anymore, and precious few heroes. If there is to be a new dawn of cycling born out of the ruins left us by Armstrong and others, it might not always succeed, but for its honour it should rather fail than cheat.