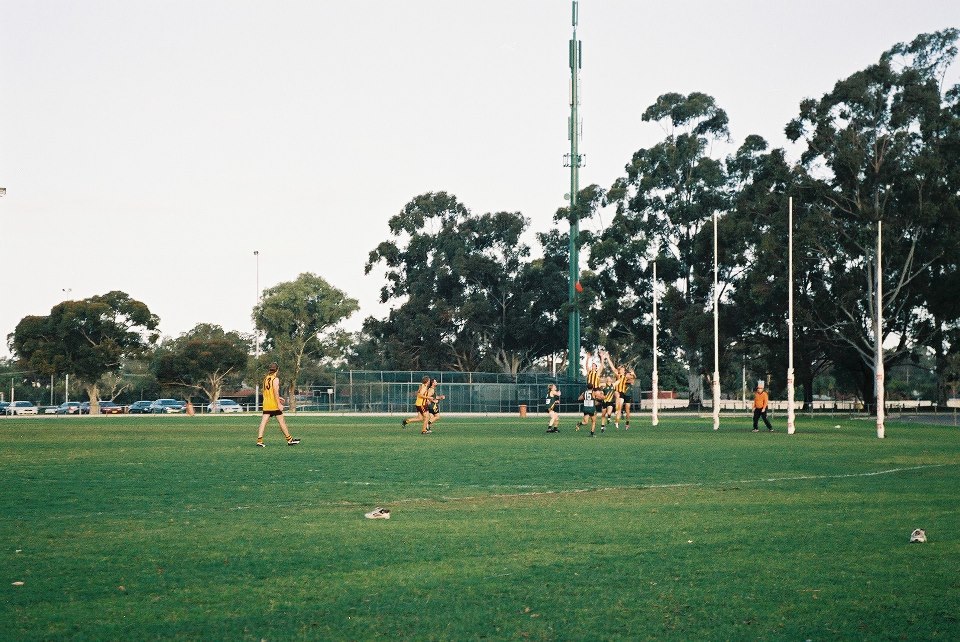 Outside it was cold and it rained. Of course it rained. A miserable November day. I was 21 in 2004 and had never been away from home for longer than three weeks. When I got on the plane, my heart felt heavy as a brick. Even though summer waited on the other side. I was headed for Australia and for the woman I loved. But there were mixed emotions. Leaving is never easy.

I lived in Perth for a year. I didn’t travel around as a back-packer, but  stayed in a house, walked to the shop at the end of the road for ice-coffee and spent hours waiting at the Booragoon bus stop. Did the normal things of everyday life. And yet, I was never bored and never homesick. That wasn’t just thanks to Camilla. Another group of unlikely heroes made my stay unforgettable. This blog is for them: the mighty Applecross Hawks.

Sports run through the veins of Australia. And the one that makes it course the fastest is Aussie Rules Football. A simple game of gracious side-steps, unrivalled skill and brute violence. I’ll spare you the rules. Suffice to say that amongst the bitter it is also known as Aussie No Rules.

The perfect sport for a naive new arrival. That’s why I decided to join the team that played at the end of the road. The Hawks trained two or three times a week and played their games on the Saturday. The past seasons they had not managed to win a game. It seemed like the ideal environment to develop my talents.

Mostly I played CHB or in the ruck, but that really doesn’t matter much. I enjoyed my time and met new friends. I drunk their beer and shared in their jokes.

There was Don, our team manager, who had once told Nicole Kidman that she would never get anywhere. Lenno, who every game hobbled nervously along the sidelines with a busted knee. And made up for his absence on field by providing food and beers off field. Swede, who, if we were honest, was a class above the rest of us. Angry and his kamikaze-style of defending making up for any lack of finesse. The brothers Boz and Jazz, who I could hardly tell apart at the best of times. Let alone after a few drinks. And Adam and Beau of whom I only late in the season realised that they were brothers too. Milat was named after a serial killer, but I have no idea why. He was one of the nicest guys you could ever hope to meet. Howser, who, when he believed to have lost a bet, put a huge tattoo on his calf. Only to win after all, when Freo missed the finals in extremis.

And of course, Fish. Fish was 40 years old and our coach. But because we were always struggling to get enough numbers, he regularly played as well. Hard as nails and deceptively quick for his age. He remained convinced that anyone younger than 35 could do well to toughen up. After each game, his ankle swelled to the size of a kettledrum. When I voiced my concern, he laughed it away. Fish didn’t do excuses.

Applecross is one of the richer neighbourhoods in Perth. And although we were a bunch of road workers, students and plumbers, we still bore that name. So everyone enjoyed getting stuck into the ‘rich kids’. I can vividly remember a game we played against the Magpies (a team of Aboriginal players) who put us to the sword by about 100pts. While smiling. Their best player, a midfielder in his thirties, only had one eye. I still cannot believe how good he was without any depth perception whatsoever.

One time, things escalated. We had travelled to Roleystone, a village in the hills outside of Perth. I was playing in defense and clashed with their forward. He dared me to push him one more time. What followed was a brawl that spilled into the car park. The game got cancelled. But we were smiling in the bus on the way back. Apparently we fought better than we played footy that day.

That didn’t mean the season was lost, though. On the contrary, in 2005 the Applecross Hawks won three games. After the first one we got blind drunk and plundered the Fremantle night life like overexcited Vikings. We even managed to make the newspaper: (http://aussierules.australianrules.com.au/2005stories/applecross.html)

The Hawks are no longer. In the years after I left, the club fell to lack of money and players. But in my heart we still run out onto the field with the same boundless enthusiasm. Even though we’re sixty points behind. And every time I find myself in Australia I try and see them. Then, for a while, holding a stubbie and with the smell of burning meat in the air, we are winners again.

I didn’t get homesick until two weeks before I left. When everything had been packed and the footy season had finished. 2004/2005 was a good year for me. I learned a lot and I grew a lot as a person. A year that taught me that mateship really is no more complicated that kicking a ball around while waiting for the barbie to heat up.

Hawks, thank you. Without you, my life would have been much poorer.